PlanB, creator of the popular Bitcoin Stock-to-Flow (S2F) model, called Bitcoin’s price retracement from the $60,000-level the “2nd leg” of what appeared like a long-term bull market.

In doing so, the pseudonymous analyst cited S2F, which anticipates Bitcoin to continue its leg higher and reach $100,000 to $135,000 by the end of the year.

The price projection model insists that Bitcoin’s value will keep on growing until at least $288,000 per token due to the “halving,” an event that takes place every four years and reduces BTC’s issuance rate by half against its 21 million supply cap.

Each event decreased the cryptocurrency’s new supply rate by 50%, which was followed by notable increases in BTC price. For instance, the first two halvings prompted BTC price to rise by over 10,000% and 2,960%, respectively.

The third halving caused the price to jump from $8,787 to as high as $66,999, a 667.50% increase. So far, S2F has been largely accurate in predicting Bitcoin’s price trajectory, as shown in the chart below, leaving bulls with higher hopes that Bitcoin’s post-halving rally will have its price cross the $100,000 mark.

PlanB noted earlier this year that Bitcoin will reach $98,000 by November and $135,000 by December, adding that the only thing that would stop the cryptocurrency from hitting a six-digit value is “a black swan event” that the market has not seen in the last decade.

Despite the high price projections, Bitcoin can still see big corrections in the future. PlanB thinks the next crash could wipe at least 80% off Bitcoin’s market capitalization, based on the same S2F model.

“Everybody hopes for the supercycle or the ‘hyperbitcoinization’ to start right now and that we do not have a big crash after next all-time highs,” the analyst told the Unchained podcast, adding.

“As much as I would hope that were true, that we don’t see that crash anymore, I think we will. […] I think we’ll be managed by greed right now and fear later on and see another minus 80% after we top out at a couple hundred thousand dollars.” 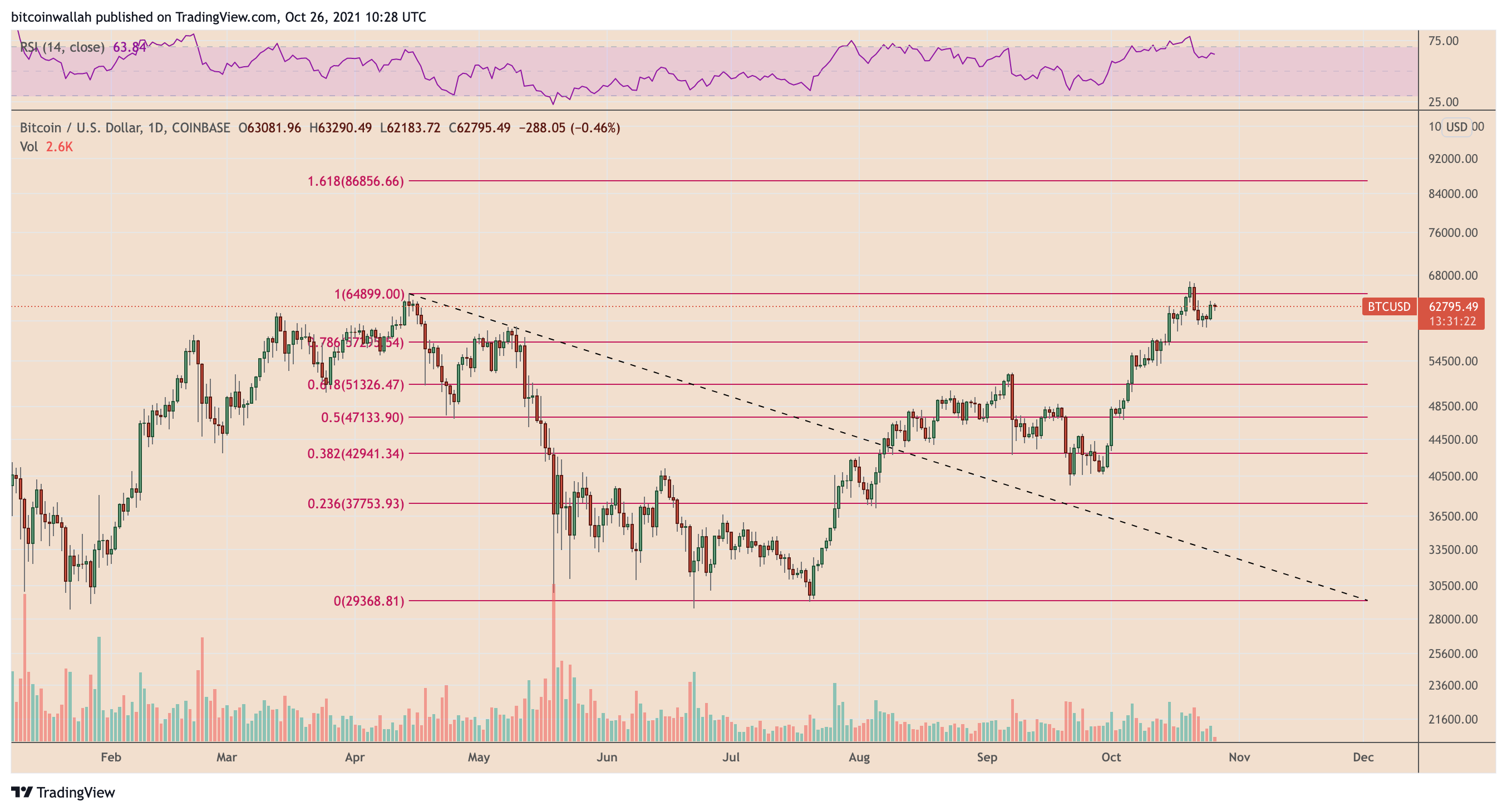 But not everyone thinks the next correction will be as dramatic as the previous ones. Dan Morehead, CEO of Pantera Capital, said in mid-October that the next Bitcoin price drop will be less than 80%, citing a consistent drop in selling sentiment after each halving cycle.

Last week, Bitcoin established a new record high at around $67,000 following a 53% rally in October so far. But the new highs prompted profit-taking among traders, resulting in retests of the $60,000 support level.

The views and opinions expressed here are solely those of the author and do not necessarily reflect the views of Cointelegraph.com. Every investment and trading move involves risk, you should conduct your own research when making a decision.

Crypto.com to Acquire Nadex, Small Exchange to Expand US Presence

Daniel Lawson - October 16, 2021 0
The Chief Executive Officer of Morgan Stanley, James Gorman, has stated that crypto assets are not a fad and are not going away.  Mr. Gorman...

Still Early but Crypto Can Be Used for Oil Trade Settlements,...

Nearly 100% of Bitcoin Supply Slides Back to Profitability Amid an...